The first set of guidelines was released in 1998, which were specific to the C language. However, since then, the MISRA Consortium also develops coding standards for C++. Every MISRA C document contains a set of rules, noncompliant examples, and detailed sections on the background information that contributed to the development of said rules.

Although MISRA C is not a style guide, numerous rules also promote the writing of clear, readable maintainable code. This is very beneficial, as code that is straightforward to understand is much less likely to harbor subtle bugs or undefined behavior.

In the guidance, Rule 1.3 (“There shall be no occurrence of undefined or critical unspecified behavior.”) and Directive 4.1 (“Run-time failures shall be minimized.”) are of particular importance. Many of the most serious bugs in C arise from undefined behavior, such as:

Experts contend it’s important to understand the steps that lead to MISRA compliance. This includes knowing the rules and checking your code constantly. Another step involves setting baselines.

Setting baselines is crucial because embedded systems come with legacy codebases. By setting baselines, you can focus on making sure your new code is compliant.

MISRA is a collaborative effort among vehicle manufacturers, component suppliers, and engineering consultancies.

MISRA-C Training is designed for C programmers, engineers and managers working on safety-critical applications for automotive, medical, military, aerospace, avionics,  or other life-critical applications. MISRA-C training covers the MISRA C:2012 guidelines to ensure safe coding practices can be achieved efficiently.  For example in avionics DO-178B/C compliance, developers have to practice coding techniques to be an integrated part of the requirements traceability for assurance and safety and mitigate liability and risk.

Learn about MISRA C as set of guidelines for software development promoting C programming language in safety-critical embedded applications with adoption and enforcement of coding standards within multiple domains. MISRA-C was originally was released in 1998 (MISRA C:1998)/C90, and the 2004 version (MISRA-C:2004) was designed to include a host of extensions and improvements to the original version. 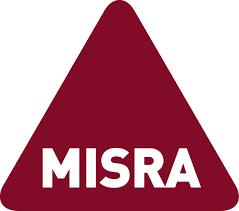 Upon completion of MISRA-C training, the attendees are able to:

Other Optional Topics and References